Description : Among American naturalists, C.S. Rafinesque (1783-1840) is second only to Audubon in the popular interest he sustains. This interest is due in part to his colorful life and provocative personality, but he is also remembered for devising Latin scientific names for more plants than any other naturalist who ever lived--and a great number in the animal kingdom, as well. This passion for nomenclature has kept his name memorable (some would say notorious) among naturalists. Yet his taxonomic writings made up only a part of his extensive oeuvre. Rafinesque's restless mind ranged over areas of inquiry from archaeology to zoology. His published writings in these fields have been difficult to lay hands on and have never been collected. Among such essays now gathered into this volume, two were unavailable until 1949, six were listed only in 1982 and four remained unknown until 2001. The recovery and reprinting of these 12 contributions help to broaden the understanding of his achievements over a lifetime. Arranged in nine sections, 25 topics are offered here (several of which are explored in more than one essay), including "the Origin of Native Americans," "Hebrew Studies," "Utopian Society," "Lightning," "The Milky Way," "Sea Serpents" and "Evolution." Editorial introductions are provided for each topic, and period illustrations--some included in the original Rafinesque publications--enhance the text. 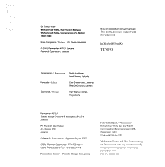