Description : The sanctuary dedicated to Diana at Aricia flourished from the Bronze age to the second century CE. From its archaic beginnings in the wooded crater beside the lake known as the 'mirror of Dianea' it grew into a grand Hellenistic-style complex that attracted crowds of pilgrims and the sick. Diana was also believed to confer power on leaders. This book examines the history of Diana's cult and healing sanctuary, which remained a significant and wealthy religious center for more than a thousand years. It sheds new light on Diana herself, on the use of rational as well as ritual healing in the sanctuary, on the subtle distinctions between Latin religious sensibility and the more austere Roman practice, and on the interpenetration of cult and politics in Latin and Roman history.

Description : One of the world's best-known biographers, Andrew Morton is a leading authority on modern celebrity, and one of the finest investigative writers of our age. His ground-breaking and controversial biography, Diana: Her True Story changed the public's perception of the British monarchy and became an instant bestseller. The original book was met with torrents of abuse from the British Establishment and the media. No one at that time would believe that in fact Diana had secretly collaborated with Andrew Morton in the writing of the book, until 1997 when its re-publication in the wake of her death showed beyond any doubt that she had in fact done so. Working with Morton on the book, Diana exposed life inside the royal family and shook the Establishment to its foundations. Sadly, however, the new life Diana had hoped for was tragically cut short. Diana: Her True Story - In Her Own Words allowed her to give her own account of life as a royal. The Princess's memory lives on, as does the public and press interest in her. This world bestseller bears testimony to Diana's life, finally allowing her to have her say. It is the closest we will ever come to her autobiography.

Description : Supplemented by photographs, offers a personal look at the woman known for her humanitarian inspiration to the world.

Description : The book that the British government tried to ban! British investigative journalists Jon King and John Beveridge have maintained from the outset that they were informed of a plot to assassinate Princess Diana one week before her death. Three years ago, Royal Butler Paul Burrell's revelations confirmed their claim. In an astonishing letter written ten months before her death, Princess Diana confirmed that a plot to assassinate her in a 'road traffic accident' was indeed planned and carried out by order of the British Royal Establishment. The letter, owned by Burrell and written by Diana in October 1996, reads: "This particular phase in my life is the most dangerous. My husband is planning an accident in my car, brake failure and serious head injury, in order to make the path clear for him to marry". Ten months later, on 23 August 1997, one week before her death, the authors were informed of this same plot to kill Diana. The EVIDENCE they uncovered during their subsequent investigation is truly disturbing. . .

Description : Born to privilege, living on the edge of the royal circle, Lady Diana Spencer assumed-like everyone else-that little adjustment would be needed to adapt to her new role, the Princess of Wales and future Queen of England. What everyone, including Diana, failed to factor in was that Charles, at age thirty-three, was not only a confirmed bachelor, surrounded from infancy with people to anticipate and provide his every need, he was also in a long-term, committed relationship. However, it was his duty to marry and provide an heir to the throne of England. Meanwhile, Diana, almost a generation younger, envisioned (as Edward VIII had) what a modern monarchy could be; how it could be relevant in today's complex society-a monarchy she was determined to have for her son. That these two forces-the status quo and the Modern England-should clash was inevitable, but no one was prepared for the cataclysmic climax in the story of the Queen England never had-Diana, Princess of Wales, the Lamb to the Slaughter.

Description : The death of Diana, Princess of Wales, on September 1 1997, prompted public demonstrations of grief on an almost unprecented global scale. But, while global media coverage of the events following her death appeared to create an international 'community of mourning', popular reacions in fact reflected the complexities of the princess's public image and the tensions surrounding the popular conception of royalty. Mourning Diana examines the events which followed the death of Diana as a series of cultural-political phenomena, from the immediate aftermath as crowds gathered in public spaces and royal palaces, to the state funeral in Westminister Abbey, examining the performance of grief and the involvement of the global media in the creation of narratives and spectacles relating to the commemoration of her life. Contributors investigate the complex iconic status of Diana, as a public figure able to sustain a host of alternative identifications, and trace the posthumous romanticisation of aspects of her life such as her charity activism and her relationship with Dodi al Fayed. The contributors argue that the events following the death of Diana dramatised a complex set of cultural tensions in which the boundaries dividing nationhood and citizenship, charity and activism, private feeling and public politics, were redrawn. 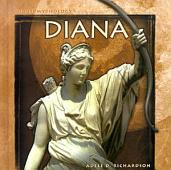 Description : Relates the exploits of Diana and her importance in Roman mythology, including her connection to such figures as Actaeon and Orion, and describes the role of myths in the modern world.

Description : A collection of essays analyzing the hype surrounding the death of Princess Diana, and what it says about modern society

Description : Text in English & German. This book contains 19 articles dealing with various aspects of the Greek goddess Artemis and the Roman goddess Diana. The themes presented in the volume deal with the Near Eastern equivalents of Artemis, the Bronze Age Linear B testimonies, and Artemis in Homer and in the Greek tragedies. Sanctuaries and cult, and regional aspects are also dealt with -- encompassing Cyprus, the Black Sea region, Greece and Italy. Pedimental sculpture, mosaics and sculpture form the basis of investigations of the iconography of the Roman Diana; the role of the cult of Diana in a dynastic setting is also examined. A single section deals with the reception of the iconography of the Ephesian Artemis during the Renaissance and later periods.